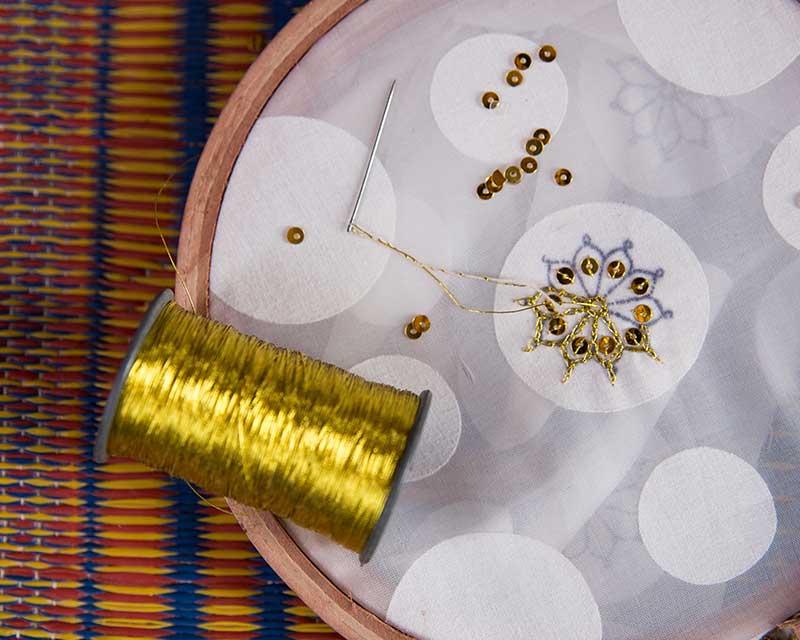 Zardozi is a form of embroidery that came from Persia. Its literal translation, “zar” meaning gold and “dozi” meaning embroidery, refers to the process of using metallic-bound threads to sew embellishment on to various fabrics. This heavy and intricate style of design is particularly popular in countries like Pakistan, India and Iran.
Zari (or Jari) is an even thread traditionally made of fine gold or silver used in traditional Bengali, Indian, and Pakistani garments, especially as brocade in saris. This thread is woven into fabrics, primarily made of silk to create intricate patterns. It is believed this tradition started during the Mughal era and the Surat pot being linked to the Haj pilgrims and Indians was a major factor for introducing this craft in India. During the Vedic ages, zari was associated with the grand attires of Gods, kings and literary figures. Today, in most fabrics, zari is not made of real gold and silver, but has cotton or polyester yarn at its core, wrapped by golden/silver metallic yarn. Zari is used in various forms such as Zardozi, Kataoki Bel, Mukaish, Tilla or Marori Work, Gota Work, and Kinari Work.