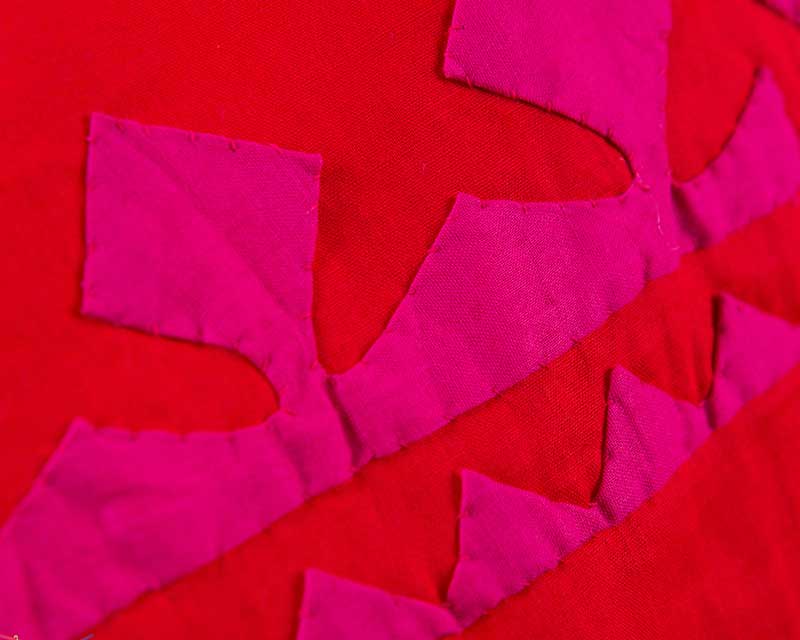 There are two types of appliqué techniques that are carried out by the traditional and the new craftswomen; under-laid appliqué and over-laid appliqué. Appliqué, on its own, refers to small shapes stitched onto fabrics, which are not cut out as in a traditional Rilli pattern. This is termed as over-laid appliqué, in which cutting out solid shapes of the accessory fabric that are laid onto a ground fabric out of the fabric. Cutwork is simply the result that is achieved when a pattern or motif has been cut out of the fabric. Once this pattern or motif is placed on a fabric to form a decorative design, it is called under-laid appliqué. Sewing the necessary fabric under a ground fabric that has cutwork done on it produces an under-laid appliqué pattern. This can also be termed as reverse appliqué. Cutwork appliqué (tukwari; tuk jo kaam), whole, is the name given to the decorative technique of applying a shape, design or motif of one fabric onto a background made of a different fabric.
History of Appliqué work in the subcontinent can be traced as back as the times when the women folk of the native communities of north Gujarat; the Kathis (the land owners), the Mahajans (the businessmen), the Rabaris (the nomad camel herders) and the Muslims produced large canopies, hangings, friezes, bullock-covers (Jhul), tents for ox-carts with human and animal figures stitched on them.
Amongst the wide legacy of handicrafts that it has gained pride for, Sindh is particularly renowned for its unique patchwork quilts called Rillis. Coming from the Sindhi word “ralannu”, it means to cover, join and connect.
The lives of the people who make this textile are woven into each piece. These quilts held great significance in the province of Sindh and still do. They were originally made for the purpose of being used as blankets or covers, as protection from the harsh winds of the deserts. However, the creative endeavour that was put into making a Rilli quilt is what gave it such importance in the eyes of the maker and the beholder. Presenting a guest with a Rilli was a portrayal of unparalleled Sindhi hospitality and respect. The entire community would gather around to make a Rilli; specifically, the ones that they had to present to their daughters for their dowries. The knowledge about designs and techniques were passed down from mother to daughter, generation after generation, dating back to the civilization of Mohenjo Daro & Harappa.